Have you ever wondered about the composition of a deck of cards? Or maybe the many different ways one might be used for different purposes? If you have, today’s article is going to be one for the books, and you’ll probably look at playing cards differently by the end. 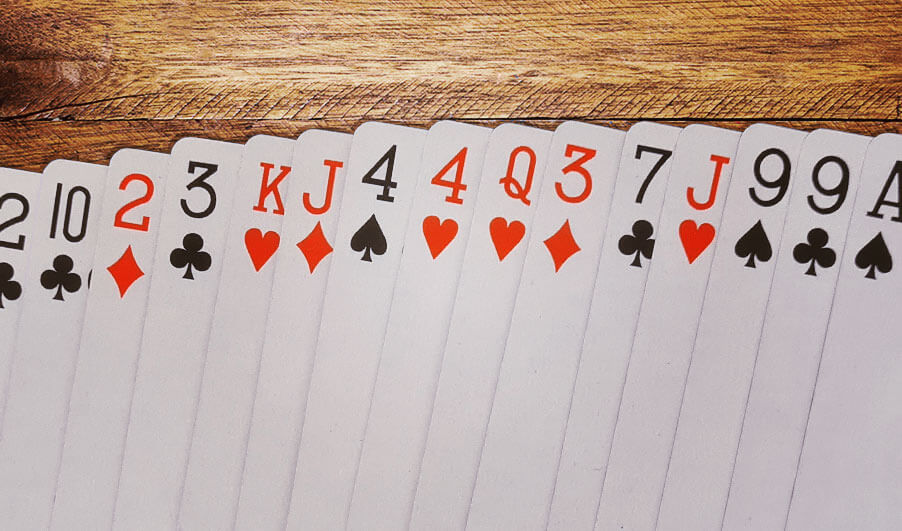 These deceptively simple pieces of plastic or cardboard have deep history and lore, as we have covered in previous articles. We sort of fell down the playing card rabbit hole recently, and we’re just bursting at the seams with fun facts. So, today’s article is designed to transfer some of that knowledge to you! Get ready to expand your knowledge, because today we’re coming at you with a handful of Fun Facts About Playing Cards!

The Hidden Meaning of the Number of Cards in a Deck

If you have read any of our articles about the origins of playing cards, you’ll recall that the actual number of cards in a deck varied quite a bit before we got to the current incarnation. 52 cards in every deck, that’s what we have now. Does that number seem familiar to you?

Well, there are 52 weeks in a year. What a funny coincidence! You’ve probably also noticed that there are 4 suits. That’s the same as the number of seasons we have… things are getting a little strange, but ok. Let’s see… there are 12 court cards in every deck. There are 12 months in a year. Every card is either red or black, which could be interpreted as day or night.

With some math acrobatics, it is even possible to get the number 365 from the values of all the cards. Each suit adds up to 91, multiplied by 4 suits, plus a Joker. 365. Pretty impressive, right? There’s no official documentation suggesting that the composition of a deck of playing cards is based on the Gregorian Calendar, but the evidence is pretty overwhelming, don’t you think?

Not Just a Cure for Boredom

You can always rely on a deck of cards to occupy your mind and put you at ease, even when things are tough. During World War II, soldiers would carry around decks of cards to unwind with or build camaraderie with their fellow fighters. However, these weren’t the decks that you or I might have in our kitchen drawer. These specially designed decks had a special, life-saving secret that would only be apparent if you got them wet, something you would typically avoid with your favorite deck of cards.

At the time, the US Playing Card Company was responsible for producing special cards that each contained a piece of a map sandwiched between two halves of a regular playing card. When subjected to moisture, the halves would peel away to reveal map pieces, which could then be pieced together to create a life-saving tool behind enemy lines. These special decks are said to have been used in around 300 escapes over the course of the war, so they definitely came in handy! Most of these decks have either been used or lost to time, but you can still find two intact decks at the Washington D.C. Spy Museum.

Continuing with the roles playing cards have had in times of war, here’s something you might have picked up on if you’ve ever seen Apocalypse Now. During the Vietnam War, playing cards were used as “calling cards”, and placed upon the bodies of enemy soldiers so that there was no mistaking who was responsible. Definitely more of a dark fact than a fun one, but it made for a great scene. 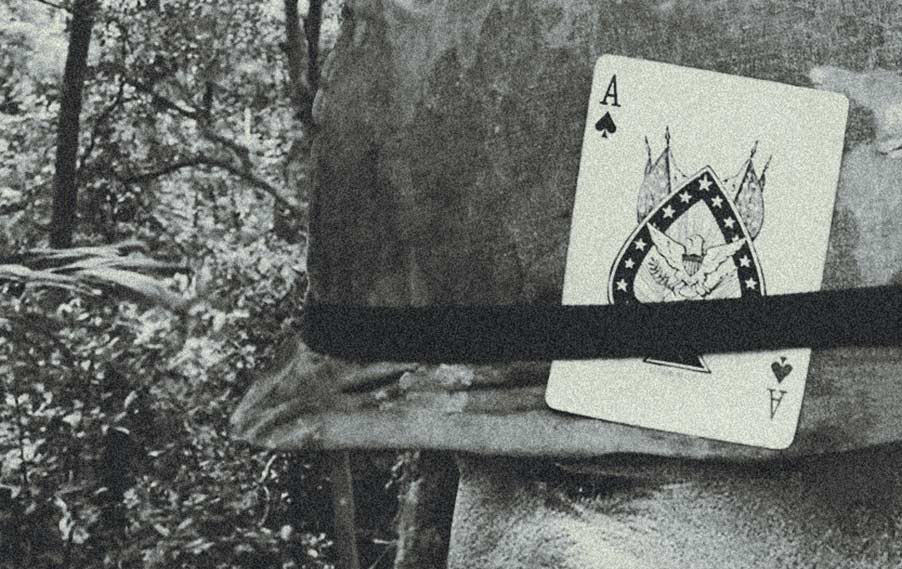 It was also believed that the Ace of Spades was a symbol of death to the Viet Cong. American soldiers would strap that particular card to their helmets, thinking it would strike fear into their enemy and give them an advantage in battle. This turned out to be false, but it did boost the morale of American soldiers, for better or worse.

If you’re an avid reader of this site, you’ve probably already read our article on the number of ways to shuffle a deck of playing cards. If you haven’t you should check it out, it’s a great read! To save some time, I’ll give you a rough overview here, because this one is wild.

Standard decks can be shuffled in more ways than there are atoms on this planet.

That’s right, ATOMS, the smallest unit of creation that makes up the fabric of everything you can see or touch, the number of those in existence is smaller than the number of possible card orders after a shuffle. The exact number of these configurations is represented as 52! (fifty-two factorial), but the gist of this fact is that it is functionally impossible to see the same arrangement of cards twice. Ever.

Waste in the Name of Honesty

Playing cards are kind of a cornerstone of gambling, and the Mecca of gambling goes through a ton of playing card decks. In Las Vegas, a deck of playing cards might only be in use for roughly 12 hours. This can be much less for a particularly busy table, but even 12 hours seems shockingly low when a normal person can get years and years of use out of a regular deck.

But, have you taken a good look at your favorite deck of cards lately? Do you notice how some cards have very specific creases or identifying marks? This is why Vegas cycles out decks too frequently. If a card can be identified at a glance, cheaters will definitely make use of that information, and that means money lost for that table. So, it does keep players honest, but it seems to be a little wasteful all the same.

The aforementioned “map cards” that can be found at the Washington D.C. Spy Museum aren’t the only older cards on display somewhere in the world. In fact, you can get up close and personal with some of the oldest decks of cards ever made, depending on where you are!

If you ever find yourself in New York, make sure to stop by The Metropolitan Museum of Art. It has the cloisters cards, a completely intact deck of hand-painted tarot cards that have been sourced back to 15th-century Netherlands. And these aren’t banged-up, worn-out cards either. The entire deck is in incredible condition, perfectly preserved for centuries.

Another deck of cards can be found in far-off Istanbul, at the Topkapi Museum. This particular deck is of Mamluk origins, which you can also learn more about in our previous articles about the origins and evolution of playing card suits. Globetrotting fans of playing cards would do well to visit this deck one day, as it’s a piece of card history that can’t be enjoyed anywhere else.

Everybody is familiar with the court cards in every deck, and in most places, their values remain consistent. However, there was a point in time when the value of the King and Queen cards in British playing card decks would switch based on the ruler of the time. If a king sat on the throne, the King card would rank higher, and vice versa for a queen.

For many, many (many) years, this rule would have been null and void. But with the recent passing of Queen Elizabeth II and the ascension of King Charles III, it might be time to reevaluate this rule after 70 years.

You might already know this from our origins of playing cards articles, but the French are attributed with creating the prevailing composition of playing card decks. They split the cards in black and red, implemented the four suits, and even created the court cards as we now know them.

What you might not know, is that these court cards are based on real-life people from throughout history. The King of Diamond’s visage is based on Julius Caesar, the King of Spades is allegedly King David, the King of Hearts bears a striking resemblance to Charlemagne, and the King of Clubs is modeled after Alexander the Great. 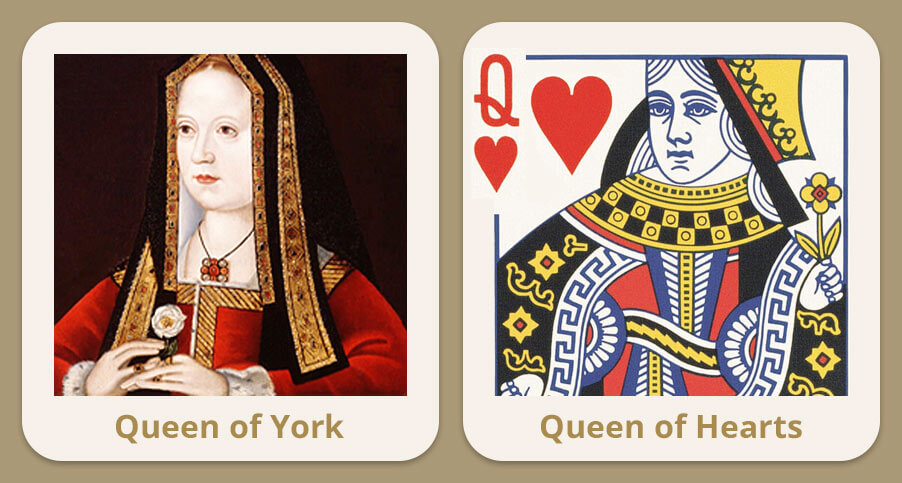 Elizabeth of York, however, presents a fairly interesting argument. The timelines seem to match up, and there is a famous portrait of this Elizabeth that does look an awful lot like how the Queen of Hearts is represented.

Alas, the word on the street is that the French designed the Queen of Hearts to be representative of Judith from the Bible, much like King David’s King of Spades. So while it is unlikely, it definitely is still very interesting to think about!

We hope that you enjoyed these few tidbits and fun facts about playing cards as much as we did. There is plenty more to learn, and we’ll be back all year to bring you fresh, new articles. See you next time!