The History of Playing Cards

If you pick up any item in your house, it probably has an incredible origin story that you haven’t bothered to seek out. For instance, consider the humble spoon. It helps you eat soup and ice cream while also stirring your tea every day, but did you know that the earliest forms of this common household item have been traced back to Ancient Egypt? Back then, they were exclusively owned and used by Pharaohs, and definitely weren’t stacked in a drawer somewhere.

Following a thread back to the origins of some of the most innocuous parts of our everyday lives can be incredibly fascinating. We have already discussed the History of Solitaire previously on this blog, but what about the objects that make Solitaire possible? Where did they come from, and how did they evolve into their current form? Join us today as we find out in The History of Playing Cards.

Due to the fragility of paper in ancient times (they certainly didn’t have the durable cardstock or plastic-coated paper we have today), it is difficult to pin down exactly where playing cards come from. However, the investigations of historians and other scholars have resulted in a best guess of somewhere in Asia.

There are scrolls dating back to China’s Tang Dynasty that describe a game involving paper tiles. These scrolls have been used as evidence of the Chinese origin theory, but it is in no way definitive or even verifiable. But, if it is in fact true, that would mean that playing cards, dominoes, and mahjong all have a common lineage, which is pretty cool! 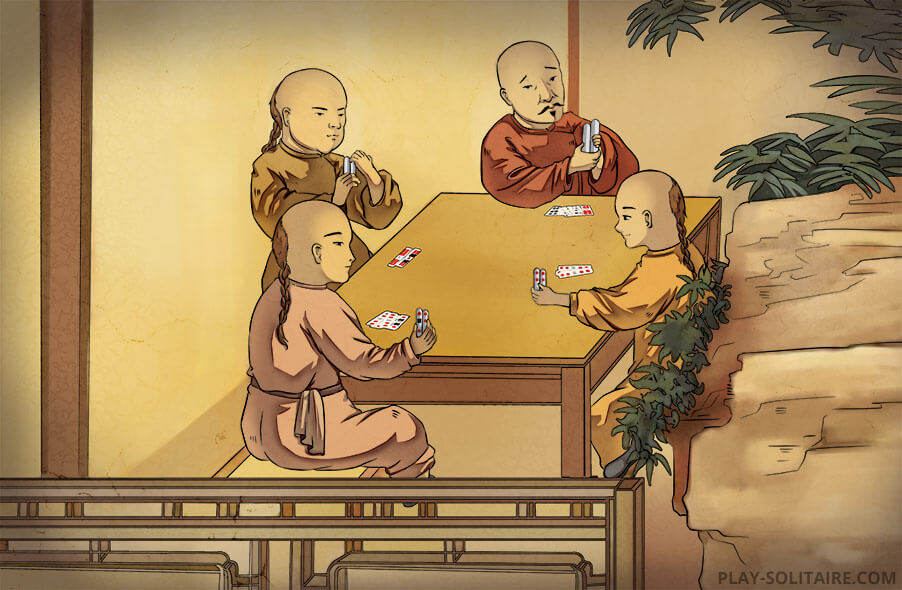 Texts from the 9th-century Tang Dynasty speak of a “leaf game”, which could perhaps further support the earlier scrolls. An entire book called the Yezi Gexi was written about the “leaf game”, allegedly by a woman in the Tang Dynasty. Many years later, in the Song Dynasty, a scholar by the name of Ouyang Xiu suggested that the leaf game was in fact created midway through the Tang Dynasty, and that it was a byproduct of the utilization of printed sheets as Chinese society moved away from scrolls.

There are even Ancient Chinese cards that indicate their use as perhaps a type of game currency, similar to monopoly money, with various amounts of worth conveyed by their four suits: coins, many coins, myriads (a term meaning 10,000), many myriads. Documents relating to these cards also suggest that they were used in games that involved copious amounts of alcohol. So, they weren’t just highly inventive. The Chinese also knew how to party!

It is also worth noting that there is some evidence to suggest that nomadic groups traveling through India could have possibly spread the use of playing cards, as they used an early version of cards with pictures printed on them to tell fortunes. These would later be known as Tarot cards.

Centuries later, playing cards had spread all throughout Asia and into Egypt with the help of the Mamluk Empire. Decks from that area and time are printed with goblets, swords, gold coins, and polo sticks to form the four suits. The four suits are something that appear to be consistent in playing card decks throughout time. Stay tuned for the second installment of this History of Playing Cards series that will delve into how the suits came to be, and what they actually mean.

Similar to how the spoon was a sign of royalty or divinity upon its invention, card decks created during the Mamluk period between the 13th and 16th centuries were status symbols. The cards were not mass-produced from their inception, and each card was hand-painted with intricate art on lavish paper, making them incredibly expensive. If wealthy Mamluks could see the collections of discarded playing card decks we all likely have in a closet or drawer somewhere in our houses, they would be outraged!

Playing cards continued to spread outward through Egypt, Persia, and Arabia into Europe in the following centuries. Much of this spread could have happened through merchants or even organically because, let’s face it, who doesn’t want to play cards? However, the Crusades which occurred between 1096 and 1291 AD also likely had much to do with it, as Christians ventured through Arabian countries and… let’s say “borrowed” parts of their culture. The oldest known Western deck is called the Spanish deck, and it is a straight-up copy of the Arabic deck.

These European playing cards were also like their Egyptian ancestors in that they were made by hand and reserved for the wealthy. Even King Charles VI was swept up in playing card mania. In his account book, an entry for payment was made to a Jacquemin Gringonneur in exchange for hand-painting a deck of cards that were, “pour le divertissement du roy” (for the enjoyment of the king).

Before King Charles VI commissioned his deck of cards and subsequently suffered from mental illness-related psychotic episodes (it’s not clear if the two are connected), the first mention of card games in Europe was the banning of the pastime in Barcelona around 1310. This became the first incident in a wave of card game bannings that happened throughout the 1300s, which are probably due to the correlation between card games and gambling as well as alcohol consumption and violence. Just another instance of puritanical values getting in the way of a good time. 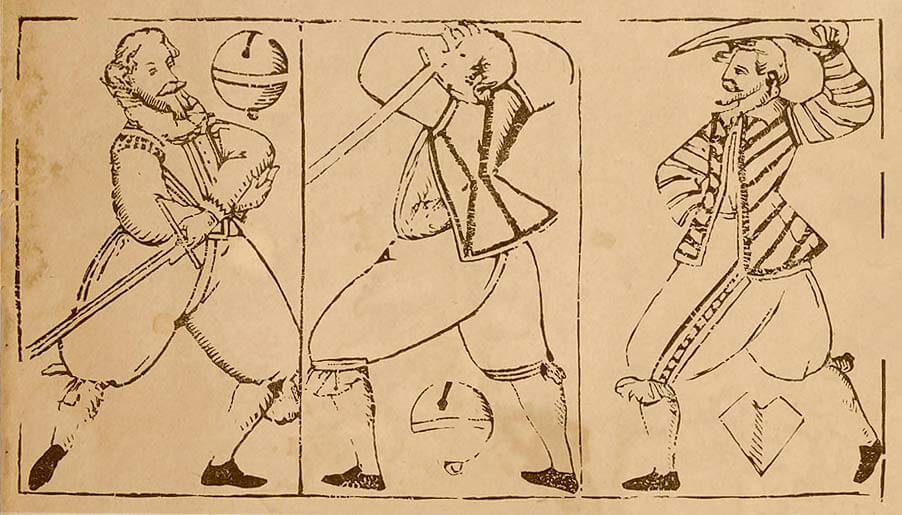 Throughout the remainder of the 14th and into the 15th century, cards continued to spread as a hobby for the wealthy. However, this dynamic would take a turn when playing cards finally reached the doorstep of Germany. Woodblock printing was discovered in the country around 1400. Our good friends in the Tang Dynasty had the concept figured out in the 7th century, but better late than never! What the Germans did with that technology changed the trajectory of playing cards, and likely led to the widespread availability that allows us to have stacks and stacks of decks laying around today.

German artisans created woodblocks with the images for each card in their deck and were able to produce many of them much faster, increasing their supply and making them much cheaper to acquire. This opened up playing cards to demographics other than the ultra-wealthy, causing another explosion in popularity. By the end of the 15th century, the French had developed stencils that further simplified the manufacturing process and resulted in the creation of the four suits as we know them now: the spades, hearts, diamonds, and clubs.

French soldiers then brought those cards over to England, where the design and production of playing cards were further enhanced. The concept of the double-ended court cards was developed at this time. Prior to this, players often had to flip court cards around when they drew them, which would give away the fact that they had one to their opponent. Briton Thomas de la Rue also drastically decreased the cost and increased the availability of playing cards by simplifying the designs of the cards and ultimately creating what we know today as the standardized deck.

Americans were basically the last group to be enlightened by the joy of playing cards, not having access to them until the early 1800s. The cards available were largely British imports at first, until Lewis I. Cohen entered the industry. Lewis spent four years in England as an apprentice studying the manufacturing of pencils, and he brought his knowledge of the manufacturing process back to America, where he used that knowledge to begin publishing playing cards. A very lucrative industry at the time, to be sure.

To ramp up his production, Lewis went so far as to invent a machine that was capable of printing the four colors present on each card’s face with a single pass. This was a huge feat of engineering in 1835, and led him to become the leading name in playing cards produced in America.

American innovation also cultivated the modern concept of a playing card deck in a few ways. First, by placing the suit of the cards in the corners, which allows for easy visibility of each card in your hand by slightly fanning them out. The Americans also added the Joker card which has gone on to act as a wild card for many games and inspire the creation of Batman villains. 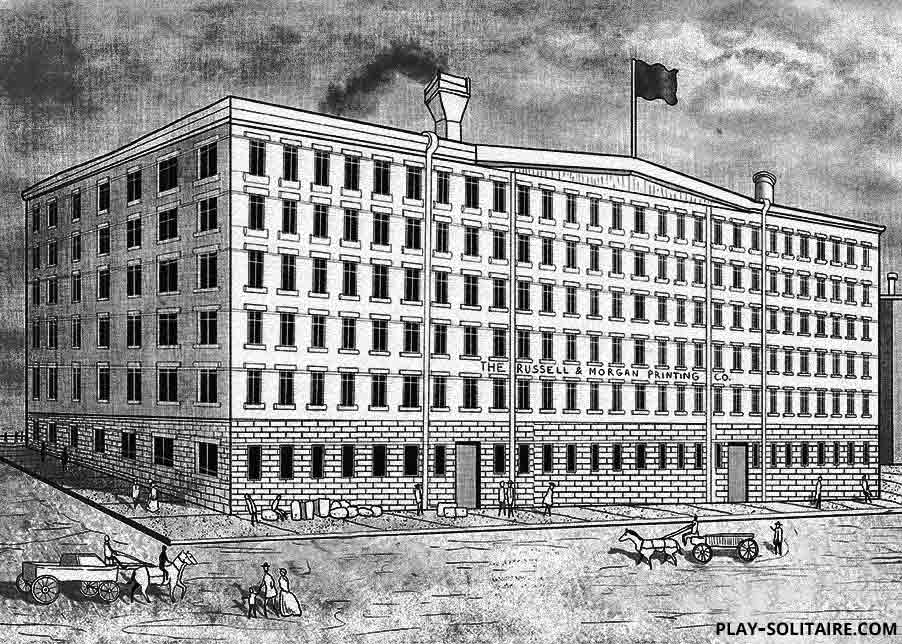 America admittedly didn’t offer much to the development of playing cards, as they had already gone through a tumultuous several centuries of development before they ever reached its shores. It did, however, aid in the production and further spread. The late 19th century saw the formation of Russell, Morgan & Co., a card printing company that would go on to become the United States Playing Card Company, one of the largest distributors of playing cards as we know them.

And the rest, as they say, is history.

Even with its murky origins, the history of playing cards is a fascinating journey into our past. It’s also a fine example of how making great things so that they are available to all, not just the rich, can only benefit humanity. Imagine what life would be like without your trusty deck of playing cards!