Home / Blogs / Heart of the Cards: The Origin and Evolution of the Suits

Heart of the Cards: The Origin and Evolution of the Suits

Cards are so ingrained into our everyday lives that you might not even think twice about them. They are plentiful, cheap, and at the core of hundreds of different ways to have fun. However, everything has to come from somewhere, and the cards we have today look very, very different from their earliest ancestors.

Today, all decks of cards follow a unified code that we know as “the suits”. Even if you use some kind of novelty deck that features its own art or some other gimmick, it will likely still feature the spades, hearts, diamonds, and clubs that have become the standard.

In our previous article, we covered the entire history of playing cards, from their (alleged) invention in Ancient China, to their spread across the world and the eventual simplification/manufacturing that allowed them to be enjoyed by all people, not just those rich enough to afford hand-painted cards. We touched on the suits briefly, but in this article we will be able to go more in-depth about those little icons that make so many games possible.

So pull up a seat, pour some tea, and join us as we delve into the Heart of the Cards: The Origin and Evolution of the Suits.

Playing cards wouldn’t see any kind of uniformity for many centuries. The earliest ancestors of the humble playing card came in many formats and designs, and the only thing they had in common other than their shape and loose suit structure was that they were all hand-painted.

Early decks of cards from China (believed to be invented in the 9th century, but earliest examples are from roughly the 15th century) depict different amounts of money, suggesting their use as some kind of play currency for a gambling game. The four suits of these cards were coins, strings (or “many”) of coins, myriads (a term here that means 10,000), and many myriads.

Aside from these money cards, there are also character cards that have been traced back to the early Qing Dynasty (the late 1600s). These cards came in several different types that we know of, including number cards, “Great Man” cards (which were based on the book of the same name, written by the Chinese philosopher Confucius), and doll cards. All of these cards were designed differently and had different information printed or written on them, but they were all tall, narrow cards. Much different from the size and shape we currently recognize.

From China, playing cards are believed to have spread to Arabia, where the people of that area took the concept and altered it for their own cultural sensibilities, a process that would happen many times before the modern version of playing cards would appear.

These Arabic cards were ornate and featured many different styles of complicated patterns, but a mostly consistent suit structure was also beginning to show up. The Ganjifa playing cards have been traced back as far as the 12th century, and typically featured the king and vizier as court cards, along with suits of coins, clubs, jugs, and swords, with a total of 48 cards in a complete deck.

Ganjifa cards were also made with a variety of shapes and materials. Decks have been found in both circular and squat rectangle shapes, and painted on everything from ivory and tortoiseshell to wood and other cheaper materials when the game became available to the wider public.

Throughout the 12th and 13th centuries, playing cards made a big step in their spread and evolution thanks to the nomadic Mamluk people. The best example of a Mamluk deck is currently one that was found in Topkapi Palace in Istanbul around 1939, which has been dated back to the 15th century. It originally contained 52 cards and four suits (sound familiar?), polo-sticks, coins, swords, and cups. The century the deck was created in clearly means it was not a prototype for the Mamluks, but rather a refined deck that had gone through its own alterations over the course of centuries.

The Mamluk deck is a direct descendant of the Ganjifa deck from Persia, to the point that it even has the word “Kanjifah” printed on the king of swords card. However, the Mamluk deck ups the ante in terms of ornateness by orders of magnitude, featuring complex art and patterns that give each individual card the appearance of a stained glass work of art. One interesting point about these cards are they are devoid of any kind of human visage. This is believed to be due to one of the tenets of Sunni Islam, which prohibits the appearance of sentient beings in most styles of art as a means of avoiding idolatry.

The Mamluk deck made its way over to Spain in the 14th century, where it was again co-opted and modified for the sensibilities of the area. The complex art was dropped in favor of more simplified, recognizable icons and images, including the reintegration of human court characters on associated cards. The suits of the Spanish deck were largely unchanged from its Mamluk inspiration, and featured swords, clubs (their interpretation of the polo-stick), cups, and coins.

As described in the previous article, once playing card made their debut in Europe around the 15th century, their popularity and spread exploded. Cards made their way to other parts of Europe shortly after Spain, where the next evolutions occurred. The Germans created suits that were more in line with their culture and way of life, which consisted of hearts, bells, acorns, and leaves. The French kept the hearts, but replaced the bells with diamonds, the acorns with clubs, and the leaves with what we know now as spades. 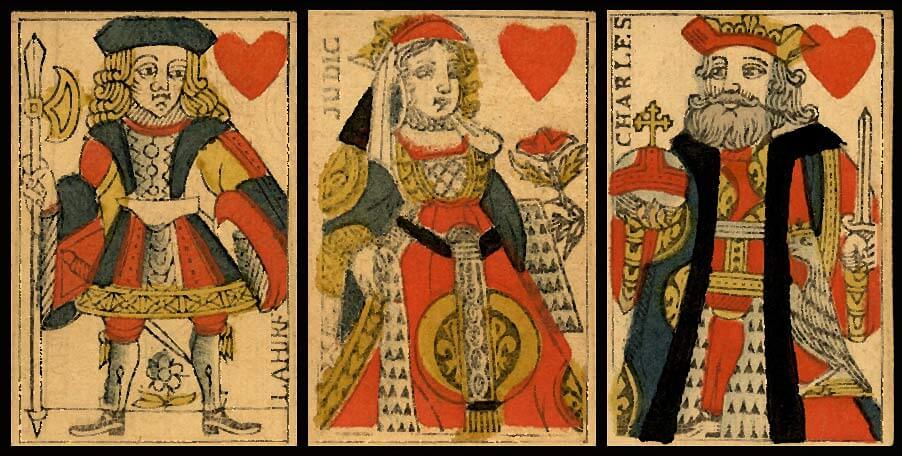 With the French putting their stamp on the history of playing card suits, the system was almost complete. The English were largely content with importing French playing cards until that process was banned in the early 1600s. This led to French-style playing card decks being produced by England for quite some time, until the late 19th century when Charles Goodall and Sons redesigned the French icons and art into the modern visuals we know and love today.

Our friend Charles De La Rue, in addition to streamlining the playing card mass manufacturing process with his invented printing machine, also came up with the idea to print the backs of the cards with lithographic images. This was done as a measure to prevent cheating, but the backs of playing cards had been historically blank on the French cards up to that point, so it also served to make the cards more visually appealing from any angle.

With that, we have reached the end of the journey for our card suits. Americans had a few notable additions including the corner indices (called “squeezers” by their inventor) and the Joker court card, but the core suits and their art have remained unchanged for at least two centuries now.

The evolution of the card suits is just as varied and complex as the proliferation of the cards themselves. Each area that gained access to playing cards over time changed certain aspects to make them unique to their culture, but the modern version, or the “final evolution” of playing cards are now in use all over the world.