The Rules of Klondike Solitaire

Few games are as globally beloved as Solitaire. For centuries, the game has entertained families and friends with nothing but a standard deck of cards and a flat surface. In today’s day and age of digital content and instant gratification, sitting down to play with cards might seem trivial or a waste of time, but that line of thinking might not be beneficial.

What if “unplugging” and enjoying a tried-and-tested game from centuries past is exactly what you need to free your mind and unwind from today’s world? There’s no doubt that just about everyone dealing with the modern issues of today could use this benefit, so why not give Solitaire a try?

Due to the game’s prevalence in our culture, you might already be familiar with the basic layout and mechanics of the game. But, if for some reason you have managed to remain completely ignorant of the magic of Solitaire, allow us to guide you through The Rules of Klondike Solitaire. Hopefully, once you see how simple and fun the game can be, you’ll be more inclined to peel your eyes away from your screens for a little while every day, and not just to sleep! 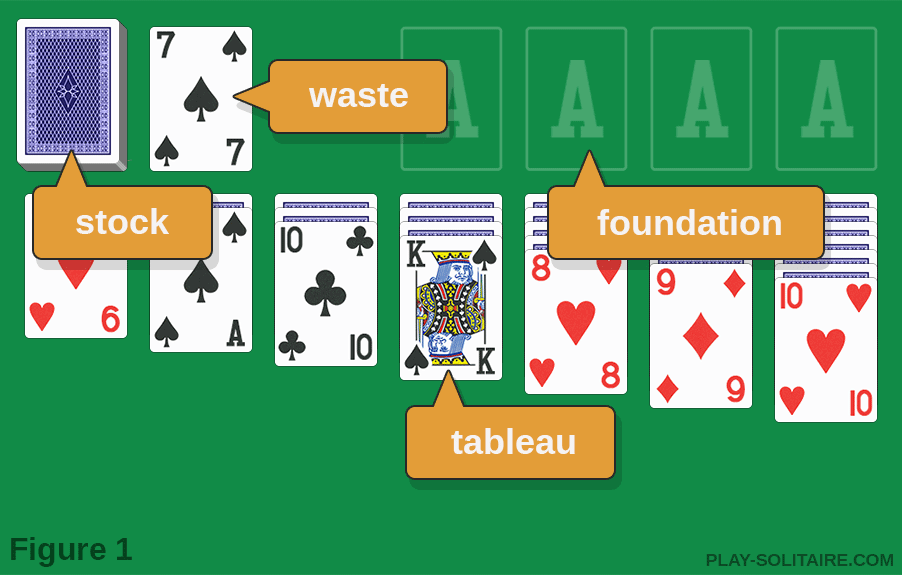 Before we get into mechanics, it is important that you first understand the basic terminology used in Solitaire. As you can probably already see, there will also be relevant pictures to help you absorb the information. How fun!

When playing Klondike Solitaire, whether digital or physical, you have a couple of options for how you will play the game. The most common ones are one-card and three-card draw, but we will be covering one-card draw with this guide as it is the most welcoming for newbies. Much of the rules and concepts also carry over to three-card draw, so it is a great place to start for any aspiring Solitaire pros.

The Objective of Klondike Solitaire

Now that you have a good base layer of knowledge regarding Klondike, we can get into what the actual objective of the game is. The goal of any Solitaire game is to get all cards from the Tableau and the Stockpile into the four Foundations. Now, you can’t just go putting cards in the Foundations willy-nilly, there is beauty and order to behold in a game of Solitaire. It’s not a barbaric free-for-all card game like War!

To successfully place cards in Foundations, you need to go in a specific order, from low to high starting with the Aces of each suit. Then it will go 2, 3, 4, all the way up to the King card. Each of the Foundations should only contain a single suit of cards.

There are a handful of “unsolvable” games of Solitaire depending on how you shuffle the cards (which it turns out can result in an effectively endless number of games of Solitaire, check out our previous article “How Random is a Hand of Klondike Solitaire” for more information on that mind-boggling phenomenon), but if you manage to get every card into its respective Foundation, that’s when you know you have won the game. 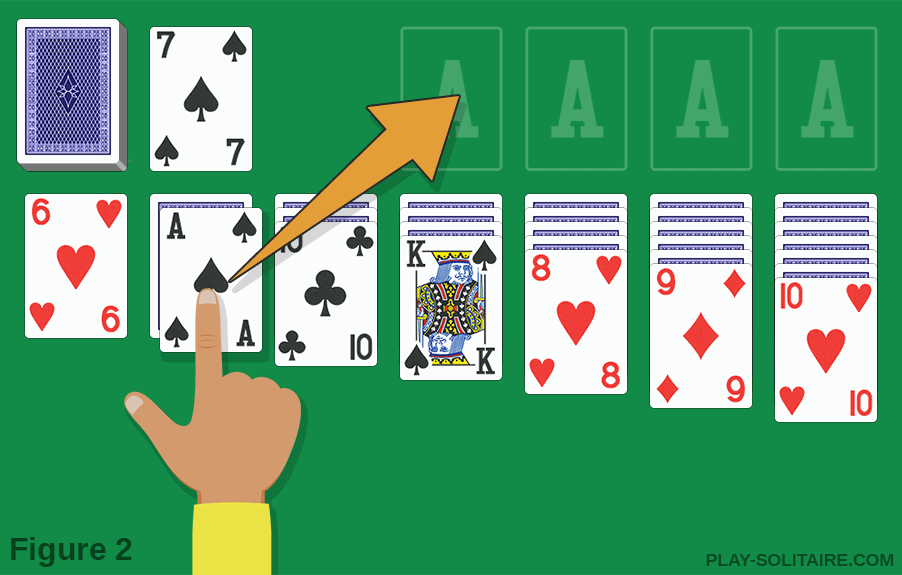 When you first begin a game of Solitaire, your first “move”, so to speak, will be to examine the playing field. Knowing that the goal is to sort cards to the Foundations from lowest to highest, are there any Aces visible? As you can see in Figure 2, there is an immediate black Ace ready to be sorted, which is a great start. Sorting a card from the Tableau also allows you to reveal the card underneath it, giving you more options. 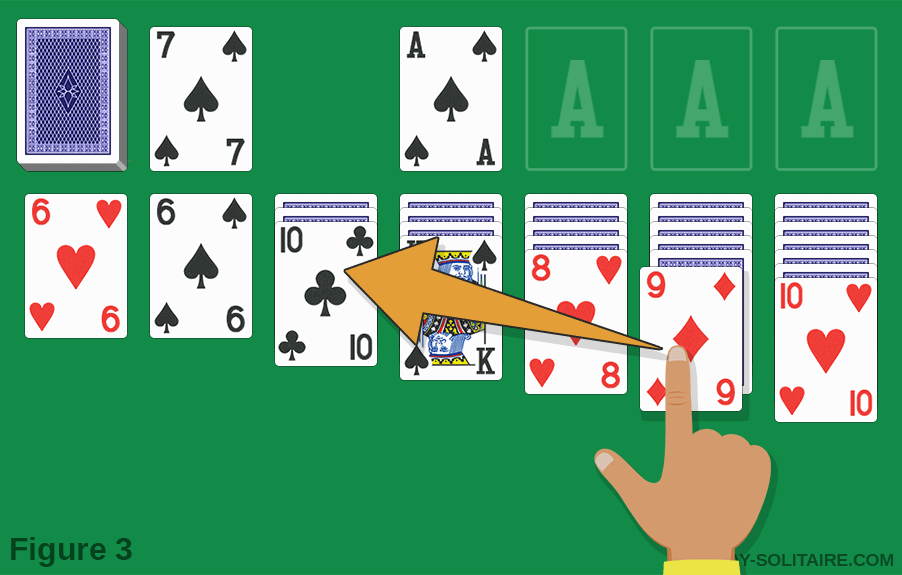 Once any and all Aces have been sorted, you can move on to the rest of the Tableau. Here, you will place cards on top of other cards with a higher value, in alternating colors. Figure 3 illustrates this, as the red 9 can be placed on top of the black 10, but not on top of the red 10. Sorting cards within the Tableau also allows you to reveal the card underneath.

This process of sorting and revealing cards continues until there are no more moves to be made. This is when we shift our gaze to the Stockpile and begin to draw cards from there. Since this is one-card draw, you will only draw a single card at a time from the Stockpile. Cards drawn from here can go straight to the Foundations or the Tableau depending on the situation. 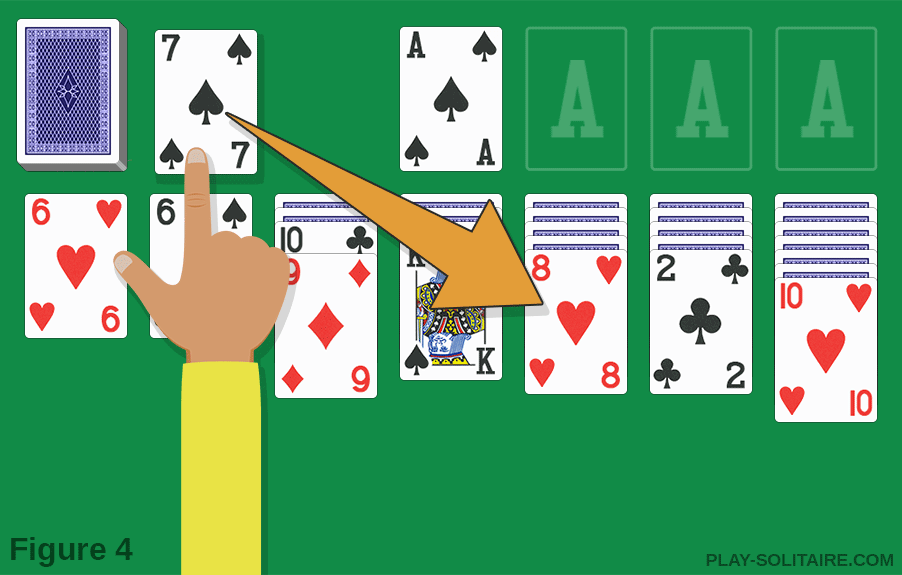 Figure 4 illustrates a black 7 being drawn from the Stockpile, which can then be placed on top of the red 8 in the Tableau. That move then makes the red 6 in column one sortable, which frees up that first column area. In Klondike Solitaire, you can place only Kings in empty spaces. If there are no Kings visible on the Tableau, you should look for one in the Stockpile. 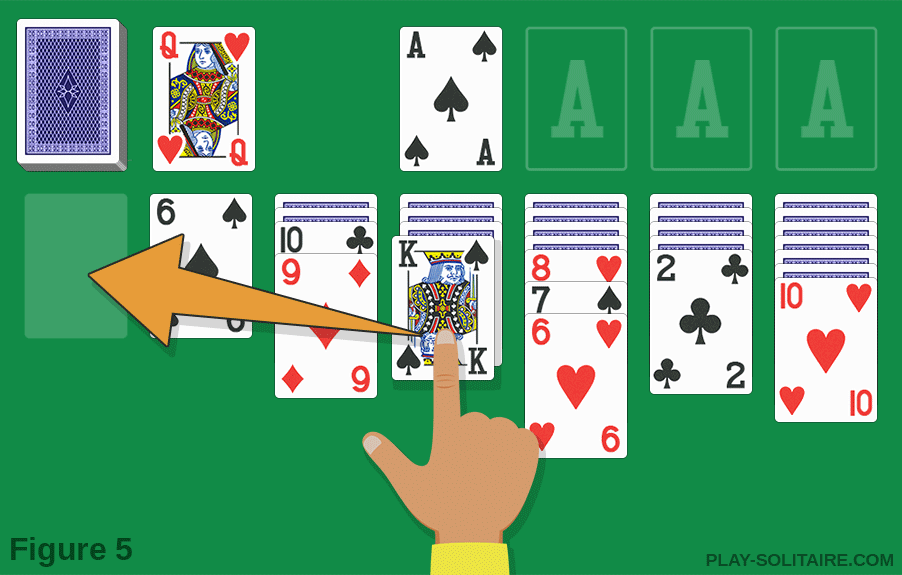 However, as you can see in figure 5, there is a King in column four. When a King is placed, you should be sorting as many cards to that pile as possible, continuing with the same sorting method (low to high, alternating colors).

When options run out on the Tableau, you can then look to the Stockpile for cards to sort. If you like, you can even move groups of cards at a time, though they need to be consecutive cards. The more complete stacks you have like this in your Tableau, the easier it will be to form your Foundations.

There’s nothing wrong with enjoying a casual game of Klondike Solitaire just to pass the time. But, if you are curious about how competitive Solitaire works (yes, this is a real thing!), then here is how scoring works in those situations.

A time bonus is also available, which is calculated by dividing the number of seconds you take to complete the game by 700,000. The resulting number is then added to your base score. However, if you are a speed demon who completes the game within thirty seconds, no bonus points will be awarded.

There you have it, potential new Solitaire fans! This guide should be enough to get you up and running on your Klondike Solitaire journey. If you get to a point where you feel that you have mastered one-card draw and want to experiment with the more difficult three-card draw, here is what you need to know.

Much of the same rules apply, however, when you draw your three cards from the stockpile, only the top card is available for use. If you are able to sort that one, then the one below it becomes available, and so on.

Good luck, and may all of your games be solvable!