Ah, the movies. Few things can take people on adventures as film can, and as technology and film-crafting techniques get ever more advanced, the action and excitement present in these filmic wonders increase by leaps and bounds. Just think about the jump in presentation from the origin of movies in the early 1900s to now. They didn’t even have sound back then!

One thing that has remained constant throughout film history is the presence of a particular card game you might be intimately familiar with. That’s right, Solitaire has popped up in many films over the years, as either a plot device or as a method of character development. If you fall in the overlap between Film Fanatic and Solitaire Obsessive, then join us as we visit a few films that feature Solitaire. 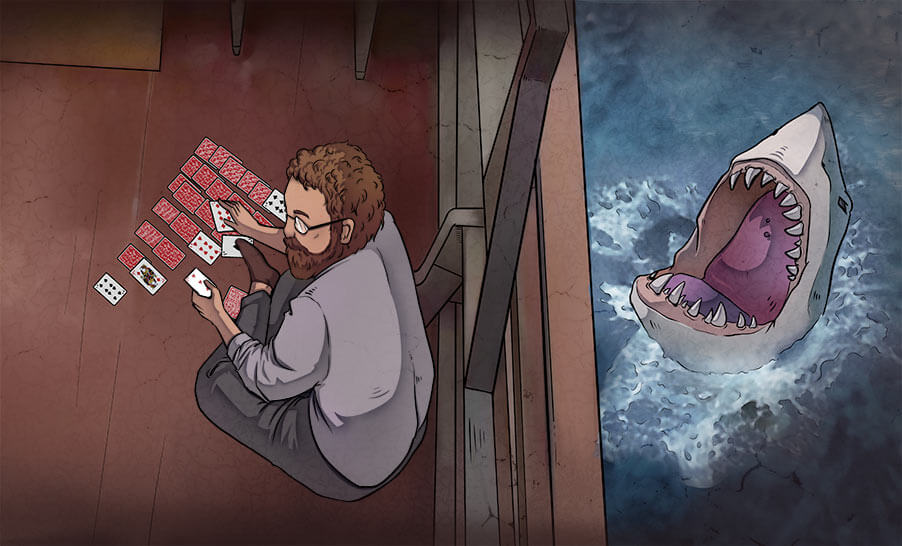 Steven Spielberg’s shark horror film probably doesn’t need much of an introduction for most people, let alone the highly advanced, ultra-attractive subset of people who enjoy both Solitaire and cinema. It broke records in its time and is known as one of the first blockbusters in cinematic history, and for good reason. It is an excellent film that continues to hold up to this very day. Just ignore the sequels. Especially the Michael Caine-starring Jaws: The Revenge. Yikes.

In the first and most successful entry in the Jaws franchise, one of the heroes of the film, the designated shark expert Matt Hooper (played by Richard Dreyfuss) is occupying his time with a very specific activity in the lead-up to the legendary “You’re going to need a bigger boat” line. While other members of the crew busy themselves trying to catch the shark that has been terrorizing Amity Island, Hooper is sitting on the deck of the ship playing Klondike Solitaire! The humble oceanographer is clearly a man of class and taste.

The 1960s weren’t just about James Bond and Flower Power, they were also home to a number of Hollywood classics, including John Frankenheimer’s The Manchurian Candidate. In it, Laurence Harvey plays a Korean War veteran named Raymond Shaw who has a particularly nasty case of “sleeper agent” buried in his subconscious.

While held captive during the Korean War, Shaw was brainwashed and programmed to become a spy when certain conditions were met. In his case, Shaw’s condition was a trigger phrase, “Why don’t you pass the time by playing a little Solitaire?” and a trigger card, the Queen of Diamonds.

This film was remade in 2004, many years later, but ditched the Solitaire-based activation in favor of a much more boring method involving names and ranks. They certainly don’t make them how they used to.

The genre of “comedy heist films with an all-star cast” isn’t a particularly large one. In fact, it basically consists of just the Ocean’s films by Steven Soderbergh. For as much fun as there is to be had across the four films in the series, we will only concern ourselves with a particular event from Ocean’s 13 from 2007.

In this third installment of Danny Ocean’s (George Clooney) legendary heists, the goal is to ruin Willy Bank (Al Pacino), a hotel owner who double-crossed Reuben Tishkoff, a friend of Danny’s and one of his original crewmates. Part of Danny’s plan, as always, involves shenanigans.

Bank is expecting a hotel reviewer to visit the hotel in order to examine it for the prestigious Five Diamond Award, an award that all of his other hotels have earned. In order to slip one of his own men into the role of the hotel reviewer, the crew terrorizes the real reviewer in a number of ways, including pumping horrible smells into his room.

When the reviewer calls the front desk to request a new room, the employee spends their time playing Solitaire on their computer monitor instead of helping him. Cruel, to be sure, but who hasn’t wanted to knock a self-important person down a couple of pegs? 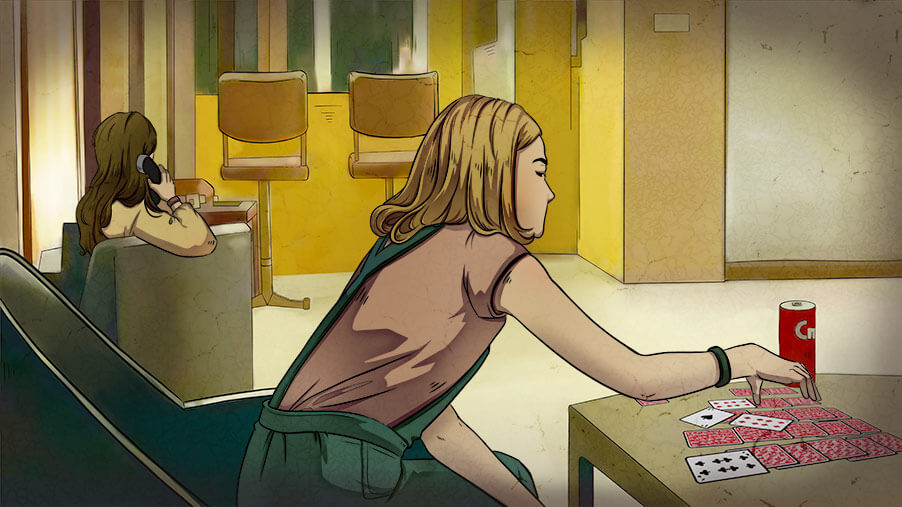 Shane Black’s cinematic credits go all the way back to the influential action franchise Lethal Weapon and the iconic creature feature The Monster Squad. However, it wouldn’t be until 2016 that the skilled writer/director would finally hit his stride by featuring Solitaire in his neo-noir buddy cop film The Nice Guys.

In it, the unlikely yet still somehow hilarious duo of Russel Crowe and Ryan Gosling as Jackson Healy and Holland March, respectively, take on a case to find a missing woman. At one point in the film, their target has been secured and is being housed safely in March’s house under the watchful eye of… his daughter Holly and her friend.

As you can probably imagine, things take a turn and the heroes learn that a hitman is en route to the safe house. March attempts to call his daughter on the landline, but her friend has the line occupied with tween talk. He wouldn’t be able to speak to Holly anyways, since she is shown to be preoccupied with a game of Solitaire. The film takes place in the late 70s when children apparently had better taste than they do now. No doubt the kid would be playing Fornite or some such nonsense if it took place today.

In the fun-filled, plastic brick-based world of The LEGO Movie, everything is awesome. The opening musical number informs us as such. The film follows the painfully ordinary LEGO man Emmet, voiced by the once-popular (and future voice of Mario) Chris Pratt, as he embarks on a journey to save the world, which is under fire by an evil madman known as Lord Business (Will Ferrell).

The film is chock-full of blink-and-you’ll-miss-it sight gags and other silliness thanks to the comedy-focused directorial duo of Phil Lord and Chris Miller. But for our purposes, we will be covering a super-quick gag that happens partway through the film. Emmet has been captured, and he is being interrogated by a split-personality policeman voiced by Liam Neeson.

While Emmet is being berated by Bad Cop, we get a peek inside the observation room, where two robots are closely monitoring the proceedings. Well, at least one of the robots is. The other is playing a digital game of Solitaire on their laptop. That’s probably not a work-approved activity, but hopefully it has the boss key ready to go in case someone shows up.

This tale of a love-stricken, stuffy Englishman named Stanley, played by Colin Firth (does he ever play any other type of character?), and a clairvoyant named Sophie, played by Emma Stone, was directed by Woody Allen. As Sophie continually surprises Stanley with her abilities, he struggles with his own preconceived notions of life and love, as he is a lifelong cynic.

Toward the end of the film, Stanley visits his Aunt Vanessa, who sits calmly at a dining table playing a game of Solitaire while Stanley continues to fret. Nonchalantly, and never breaking her focus on the game, Aunt Vanessa prods Stanley to think about things from a different angle, to listen to his heart rather than his logic.

As Stanley thinks out loud and comes to an epiphany, Aunt Vanessa continues to play the game, seemingly nonplussed. The trope of the wise mentor guiding the young and confused is well-executed here and having Solitaire be the focus of the scene displays Aunt Vanessa’s ability for strategy and cleverness as she plays her nephew like a fiddle without him even noticing.